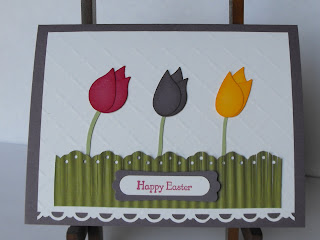 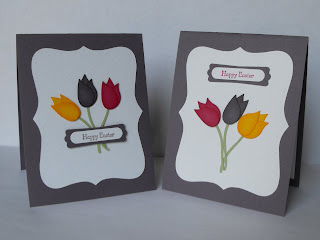 In my last post I showed you how to use the 2-step bird punch. This time I'll show you a variation by using just selected parts of the punch. I've seen this done on a few sites and loved the one done by Julia Bettancourt.
I used Perfect Plum, Summer Sun, Rose Red, Certainly Celery, Old Olive and Whisper White cardstock. The Whisper White CS was run through the Big Shot with the Perfect Details Texturz Plate. To change it up a bit, I then used the Top Note die on some of the embossed CS.
The tulips were made by punching only the wing part on the Two-Step Bird Punch. Each "petal" was then sponged with the corresponding ink. For the stems, I used Certainly Celery and just punched the branch part, leaving out the leaves.
On the sample not using the Top Note die, I was trying to think what to use in place of ribbon. There happened to be a scrap laying near-by of Old Olive CS that I had punched for another project, using the Eyelet Border punch and then ran through the crimper. So I picked it up and used the Paper Snips to cut into it to make it look like grass and placed it over the bottoms of the stems.
I thought these designs would be good to use as Easter cards and used the sentiment from Teeny Tiny Wishes - such a useful set! - stamped on Whisper White and punched with the Word Window Punch and then layered on the Perfect Plum CS punched with the Modern Label Punch. 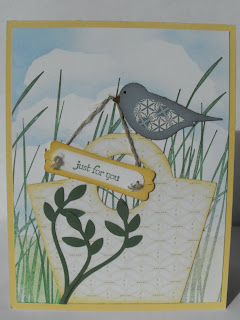 The greeting is from Teeny Tiny Wishes and stamped in Garden Green on Whisper White, layered on So Saffron punched out with the Modern Label punch. I used Linen Thread to "hang" it from the bird's beak.
at March 25, 2010 2 comments: 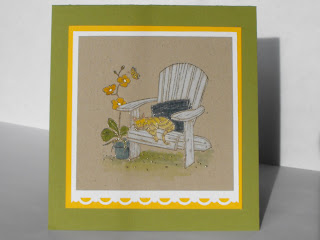 Does the cyber-world really need one more blog?
Apparently! So here I am.
I am a Stampin' Up demo and also work in the photo lab of a pharmacy chain store. Stamping has been my creative outlet for almost seven years now, and I am still excited when the new catalogues and minis come out. I love all the techniques I have learned through the years, but my all-time favourite is watercolouring. I think it's because I've always wished I could be an artist. That's the appeal of stamping to me - it makes my feel like an artist. So I'd like to share with you my latest attempt at being an artist. This was inspired by a design I saw on Splitcoast Stampers.
The stamp set is Peace Within. I embossed the image on Kraft card stock by first loading the stamp with Versamark and then Chocolate Chip Classic Ink. Then I bleached the areas I wanted to colour in, except for the chair. On the chair I used the white watercolour pencil.
My preferred method of watercolouring is to use the markers and scribble them on the lid of a stamp case and then pick up the colour with an aquapainter. Markers used for this were Not Quite Navy, Summer Sun and Old Olive. The centres of the flowers were done with a white gel pen.
The image was matted on Whisper White CS and the bottom edge punched with the new Scallop Trim Border punch from the Sale-a-Bration mini. That was matted on Summer Sun and the base is Old Olive.
at March 16, 2010 4 comments: 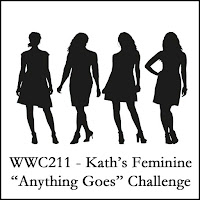 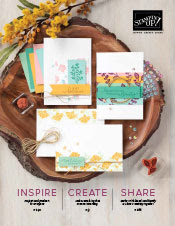 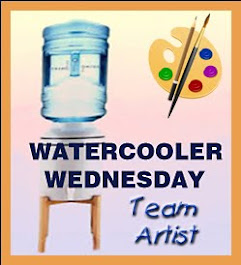 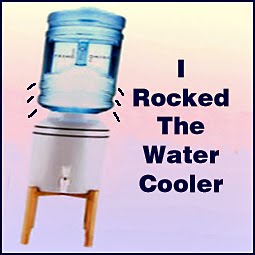 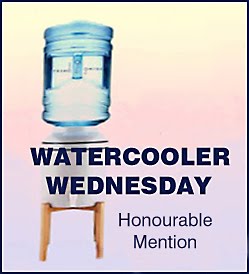